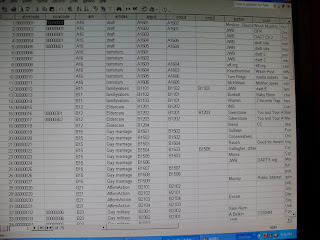 The May 2009 issue of Scientific American has a “Security” article on p 56, “How to steal secrets without a network: information thieves can now do an end run around encryption, networks and the operating systems,” by W. Wayt Gibbs. The URL link is here.

The article describes old-fashioned “real world” hacking, as from reflections from an eyeball or from the sounds of a dot-matrix printer (yes, like Okidata in the 80s). Each key on a leyboard emits a unique radio frequency that can be tracked (it is said that the CIA could spy on individual home computers before there was a public Internet as a result). A determined hacker could subvert a built in webcam, used by many new laptops to identify users, to track keystrokes. It sounds like the kind of spying of the great James Bond movies of the 60s, those with a hairy Sean Connery. The general impression is that from determine spies, these threats are still serious matters for government or high-value targets, probably much less so for ordinary users, when compared to the more familiar threats of spam, phishing, viruses, Trojans and worms.

This same issue of Scientific American has an article (“airless”) about how planets lose their atmospheres!
Posted by Bill Boushka at 6:19 PM